Today’s “I Made if From Pinterest” was actually our Easter dinner!  The husband–I really should come up with a better nickname– worked all day, so even though it was a holiday, I didn’t want to go to much trouble for dinner.  Actually, I didn’t want to go into ANY trouble for dinner–I wanted to use my Crock Pot so I could concentrate on other things.  You know, things like sitting on Pinterest all day looking for a nice, easy, Crock Pot meal, and having one way conversations with my dog.  I really should get out more….

Well, it turns out I found this YUMMY looking recipe for Ham and Scalloped Potatoes made in the Crock Pot a few weeks ago.  I have since dubbed this the Poor Man’s version of Ham and Scalloped Poataoes, because you use ham LUNCHMEAT instead of using leftover ham from Easter dinner.  And I am all about spending less.  Besides, I have never actually cooked a ham–Boneless or Bone In—never ever.  One day, I may take the challenge, but this was not the day.

I just so happened to have a tub of ham lunchmeat in the freezer from the last time I stocked up on the stuff.  I let it thaw for a few hours just until the ham was soft enough for me to dice.  I also only used 4 medium potatoes and 1 onion.  So my ham to potato ratio was just a tad off, but the hubby and I are definitely meat lovers anyway. 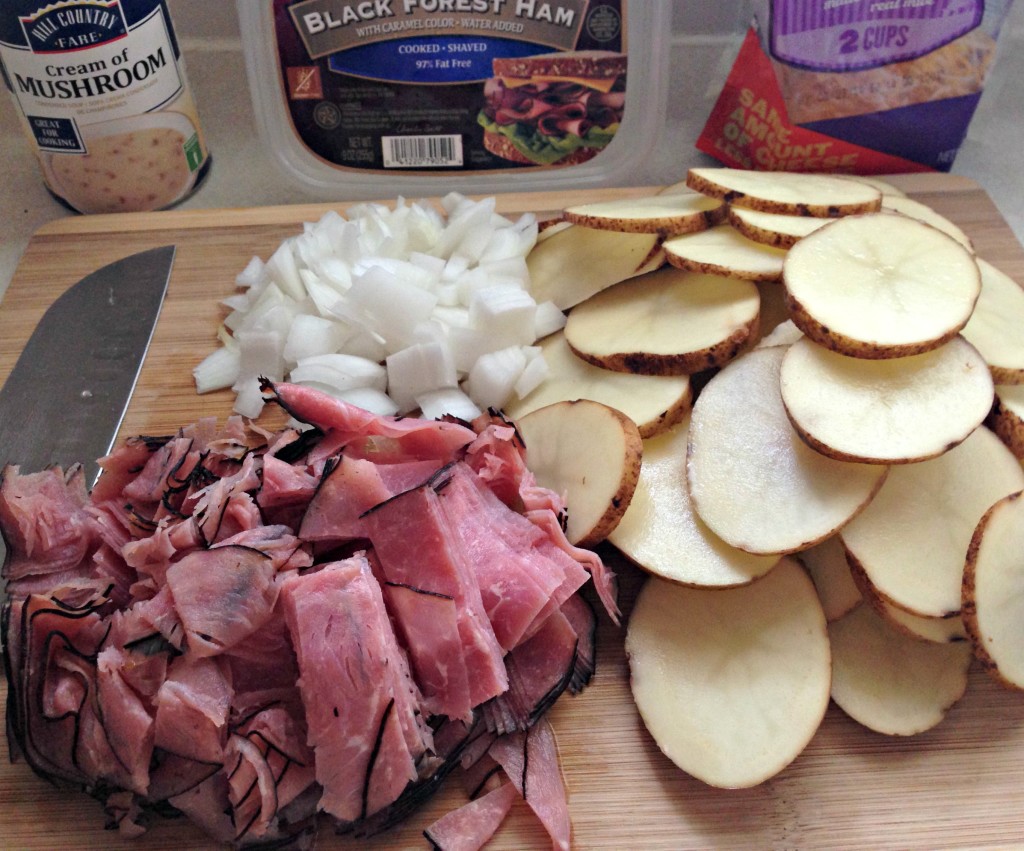 I also didn’t peal my potatoes<—-lazy

So I layered half of the ham, potatoes and onions in my Crock Pot and covered with some cheese.  I did not measure–just threw some in there.  I find it increasingly hard to explain to people how I cook when I don’t measure *anything*  You know, just whatever looks good–throw that much in. 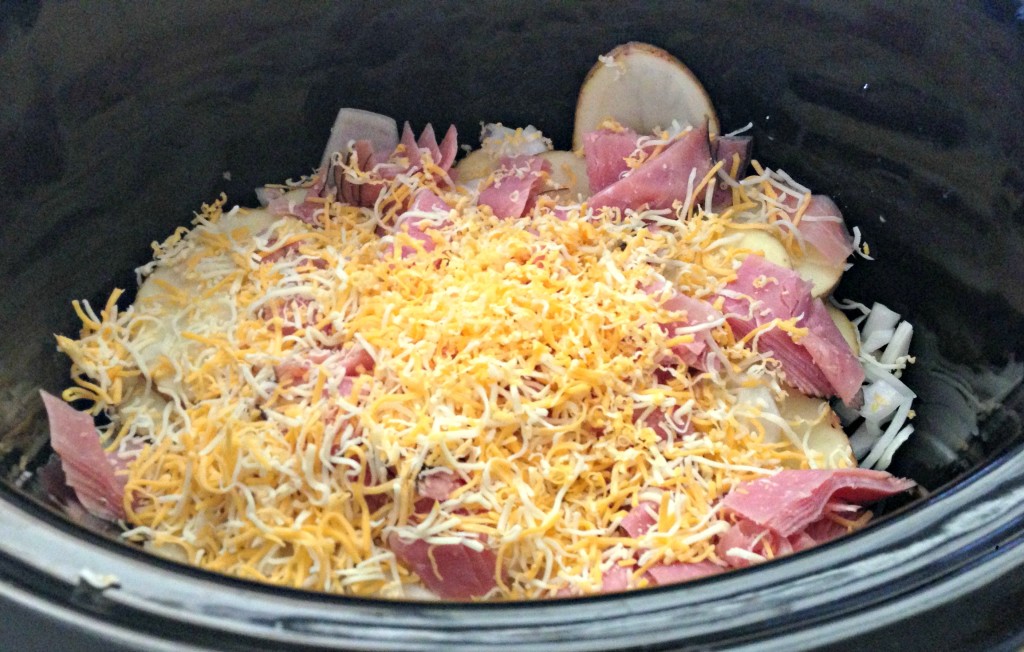 Added the rest of the ham, onion and potato concoction and spread the can of Cream of Mushroom soup on top.  Then I topped it with some more cheese and gave it a good stir 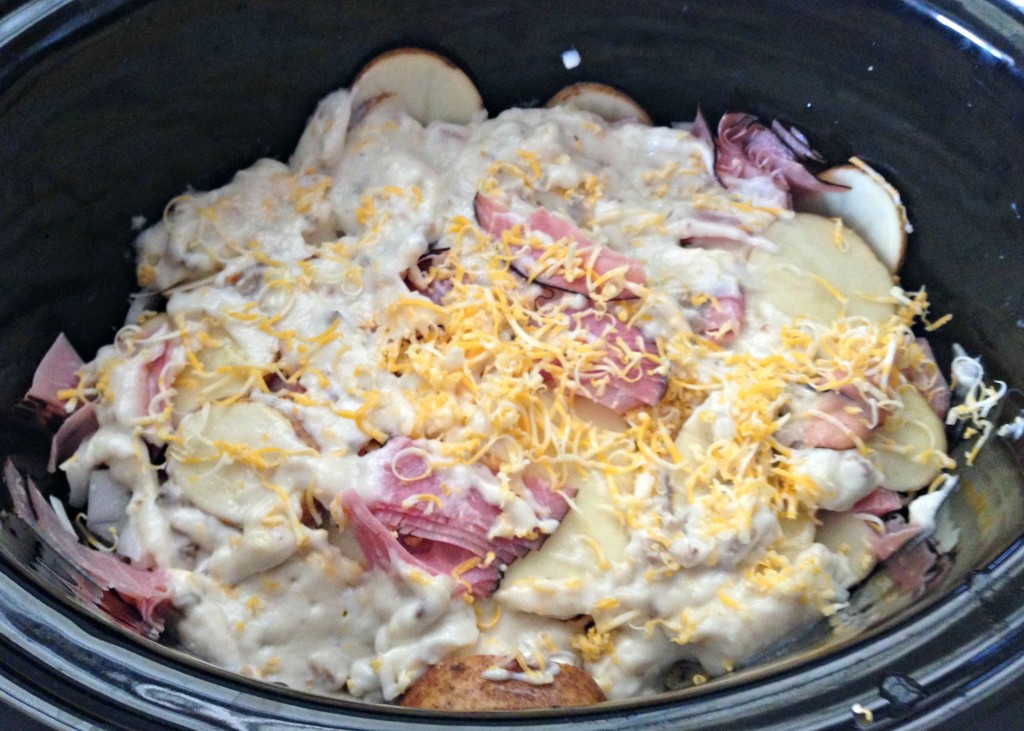 Cooked on high for 2 hours, then switched to low for 4 hours.  I actually could have just cooked it on low for the whole 6 hours probably, as some of the potatoes were a little too done.  But it was still delish none the less! 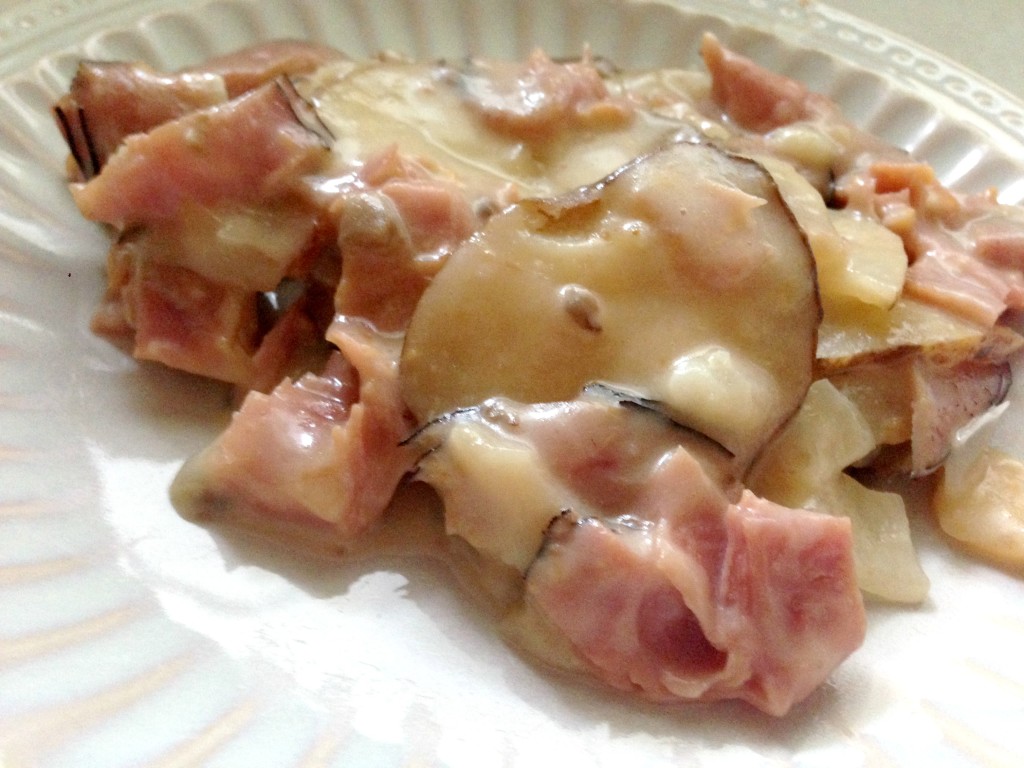 Isn’t it amazing how the Iphone can take such amazing photos?  <—sarcasm

Take my word for it, this dish was amazing!

Thanks for linking to the recipe. So glad you enjoyed it. It's one of our favorites and so easy and frugal.