If you are missing the warm and cozy comfort of a chicken pot pie in the Winter on a ketogenic diet, then you’re in luck! This Keto Chicken Pot Pie has all the flavor of the classic, but with only 7 net carbs per serving, it doesn’t pack the carb-loaded punch. 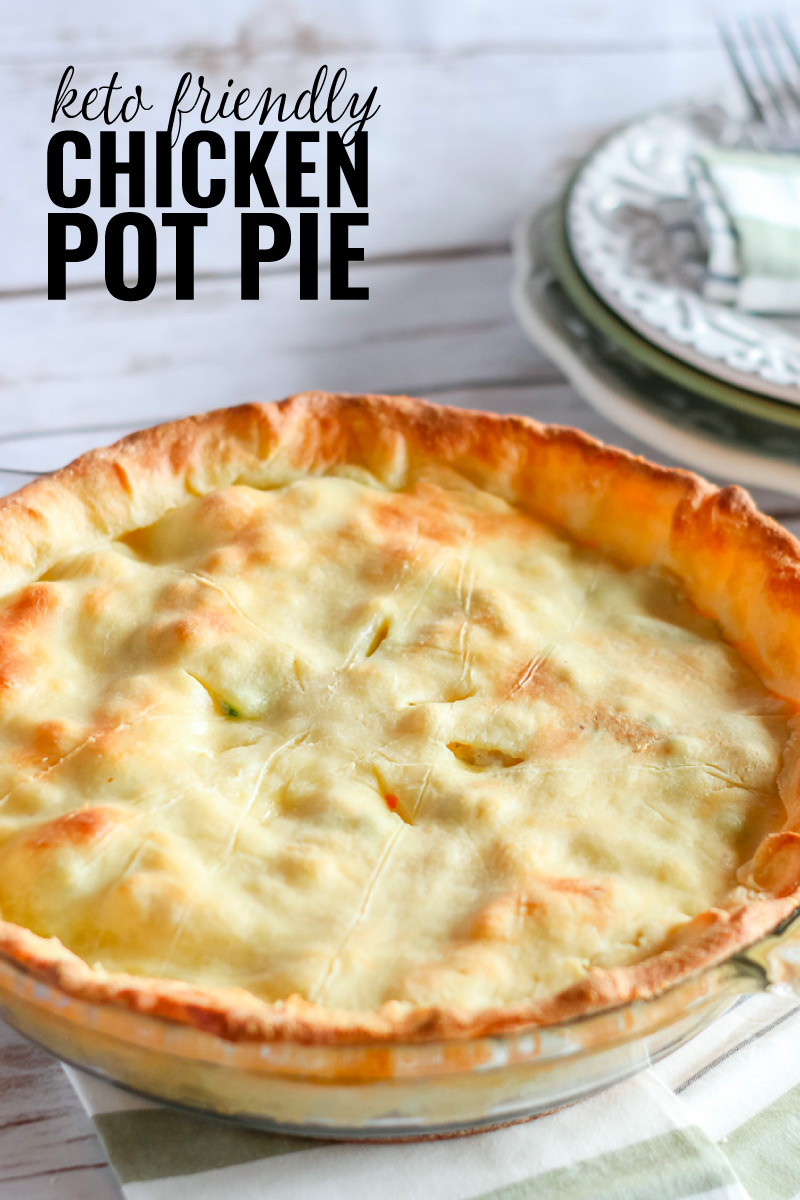 So what’s the trick to a keto chicken pot pie? Oh, just a little thing called Fathead dough! If you’ve never tried it before then you need to jump on that bandwagon ASAP! I was so skeptical when I first read the ingredient list. After all, how could a dough made of basically just cheese and almond flour be any good, and how would it not make you sick?

Lucky for me, my sister in law tried it and told me I was missing out. She was the driving force that got me hooked! So if this Fathead dough works so well for pizza crust, why not use it for a keto chicken pot pie? 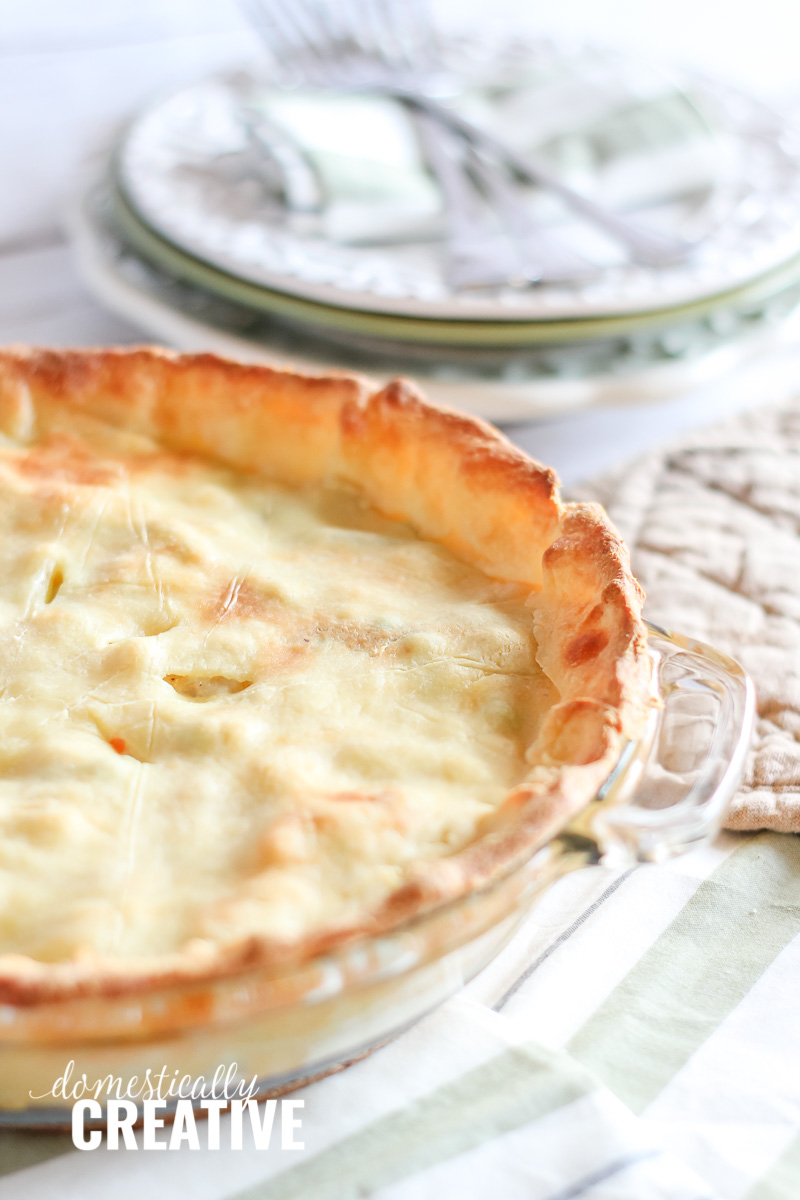 I’ve been making this fathead dough for over a year now, and I know first hand that it can be a little bit tricky to get the hang of. It’s a little bit difficult to mix almond flour and egg into a warm melted cheese mixture. Here are some of the ways I make it easier on myself:

Use a FINE almond flour. I prefer Bob’s Red Mill brand. Fine ground almond flour will mix in so much easier than a course flour.

Make sure the egg is beaten before adding in. This will help the egg white mix into the dough a little bit easier.

Use a fork, then your hands. I find using a fork to sort of mash the egg into the mixture helps a lot! After I mix as best I can with the fork, I will gently coat my hands with a little bit of almond flour and mix the rest of the way. You can also wet your hands with water and it will help prevent the dough from sticking to your hands.

You must use parchment paper to roll out the dough! There’s no way around this. I’ve tried doing it on my silicone mats and it just doesn’t work. The dough is much too sticky! 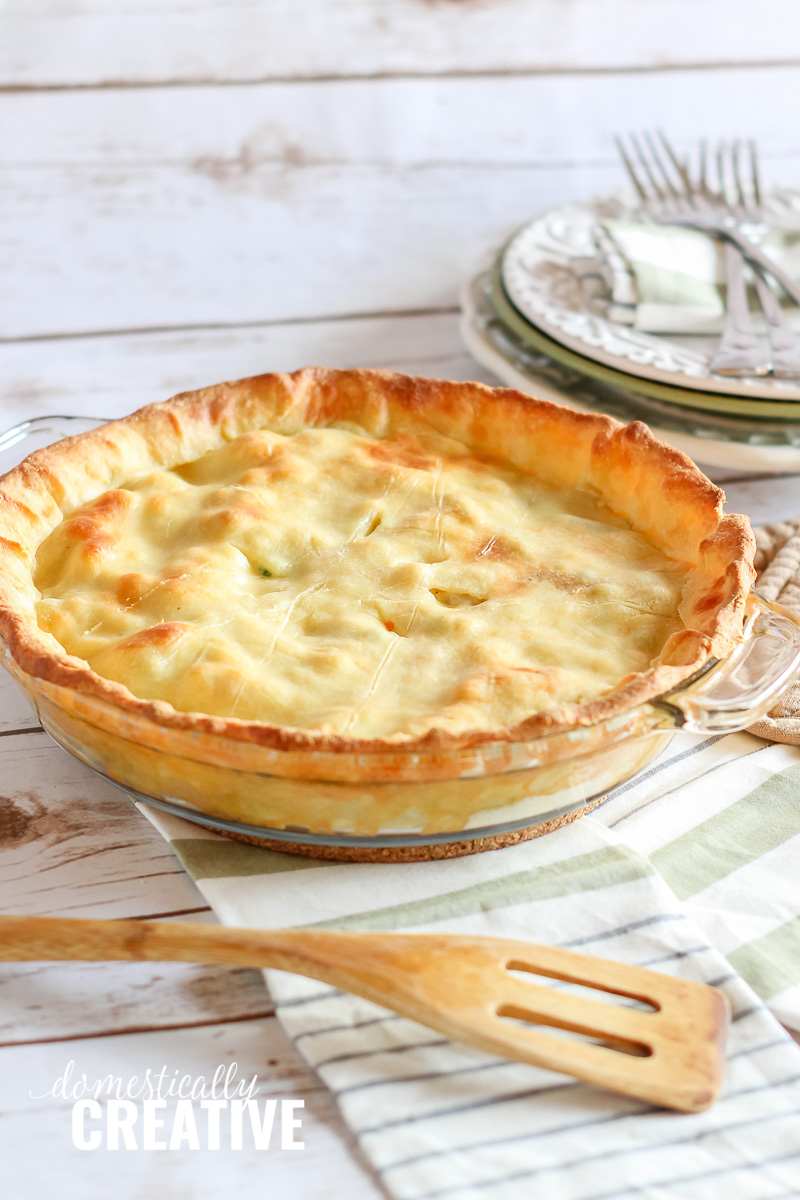 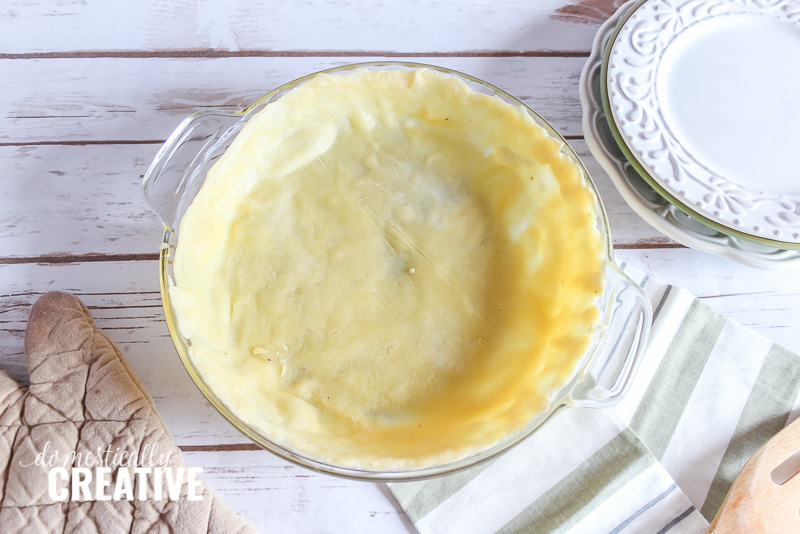 While that’s baking, roll out the other half of the fat head dough until it’s about 1/2″ wider all around than the top of the plate. When the bottom is done baking, fill with the keto chicken pot pie filling. 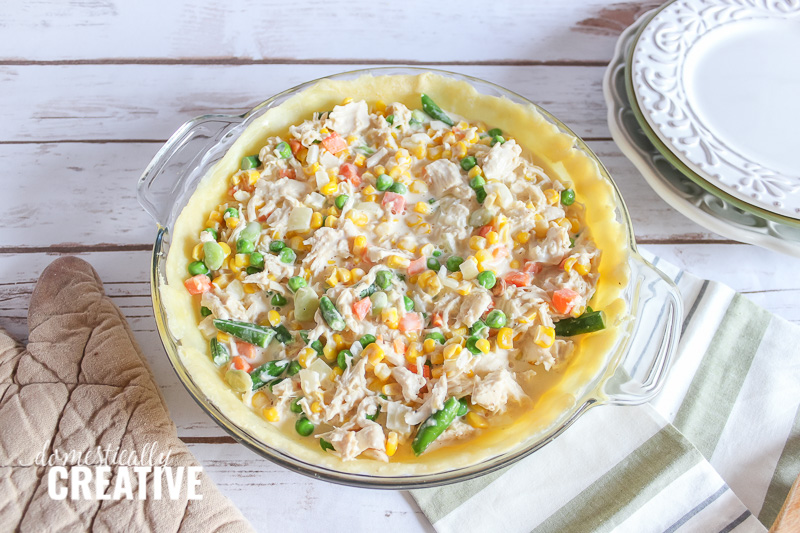 Place the top crust over the filling, and pinch the edges to seal it up. Then cut slits in the middle using a knife for steam holes. Then it’s time to bake! 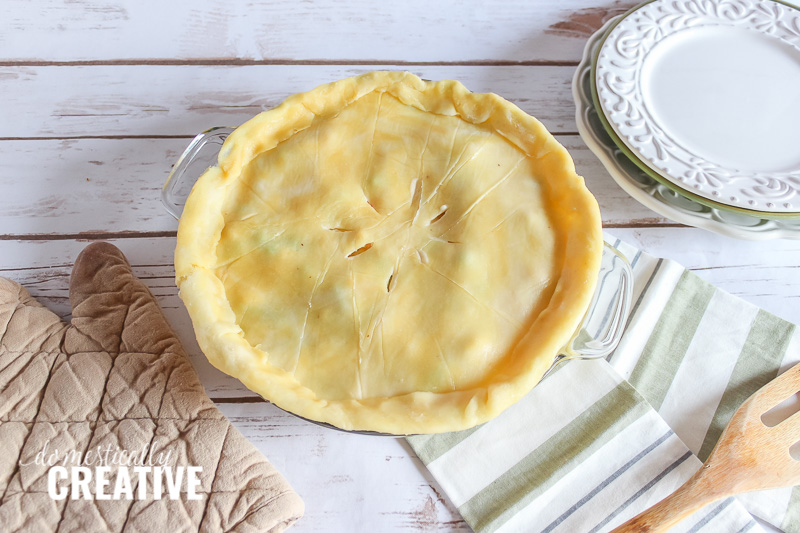 The keto chicken pot pie doesn’t take a long time to bake from here, only about 15 minutes. Just until the crust is golden brown and the top has a bit of browning as well. Let it cool for about 10 minutes before cutting into. 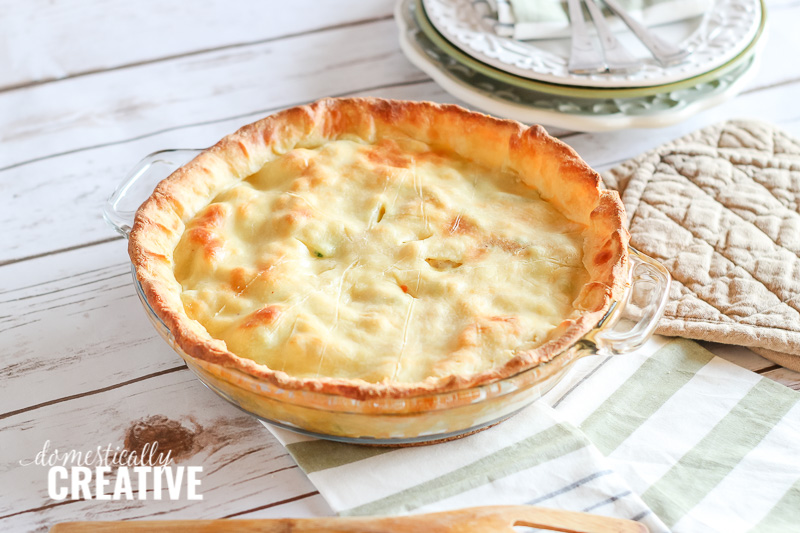 Here’s a quick tip: You could make this keto chicken pot pie with no crust! If you are looking for a warm and filling meal but only have 20 minutes, try making just the filling. Make it into a soup by adding a cup of chicken broth, or just enjoy it as is! 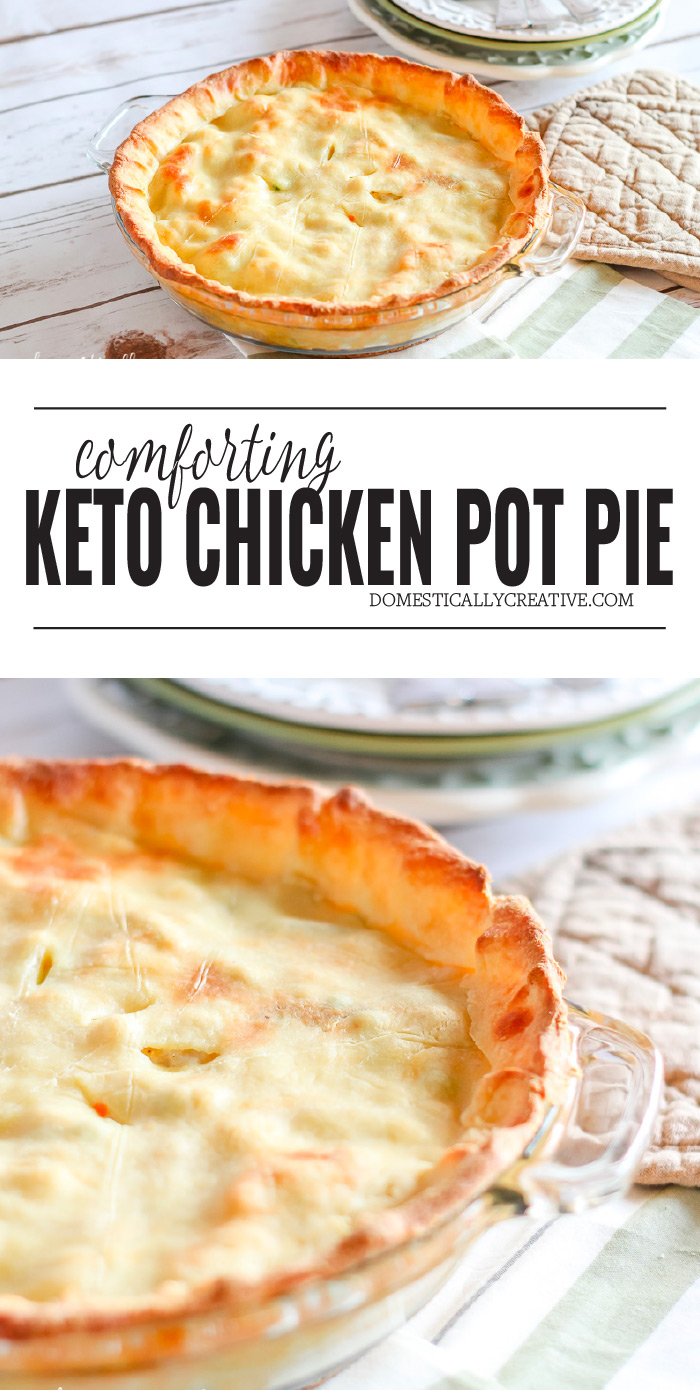