Creamy and hearty Bacon Cheeseburger Soup you can make on the stove top or in the slow cooker. It’s packed full of flavor AND a delicious low carb alternative to the traditional soup. 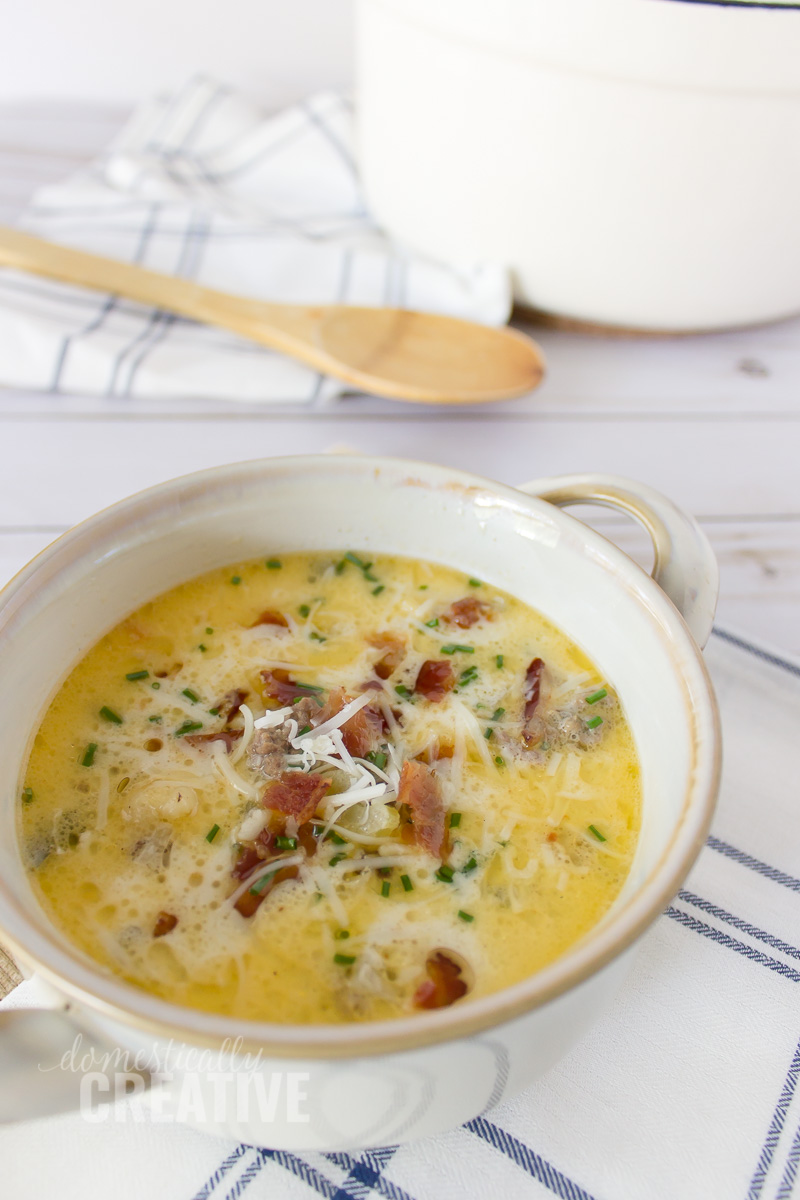 My husband rarely raves about recipes I make, unless it’s his absolute favorite italian beef. It’s not because what I make isn’t great, he just isn’t a picky eater. If something doesn’t strike his fancy he just pours on some extra hot sauce and adds cheese. But this bacon cheeseburger soup is a different story. Yes, he still adds more cheese and hot sauce, but after making this soup once, he actually begged me to make it again. And I couldn’t help but comply. I love eating soups in the Fall and Winter months! 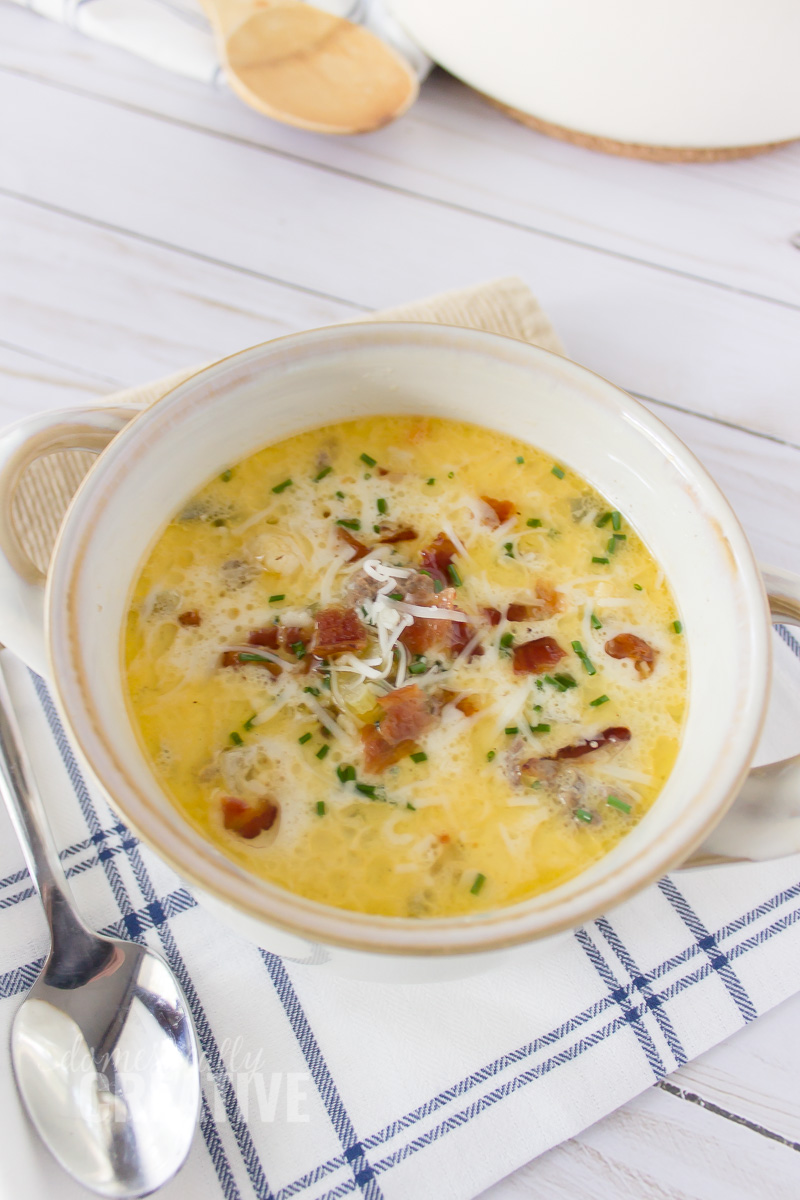 We have had some pretty chilly evenings so far this Fall, but I have down right refused to turn on our heat. I guess it’s mostly due to the fact that I just can’t believe it’s already time to kick on the furnace. This time last year I was still hanging out in Texas waiting for our home to sell. In fact, when I finally left Texas towards the end of November, I was still running the A/C! 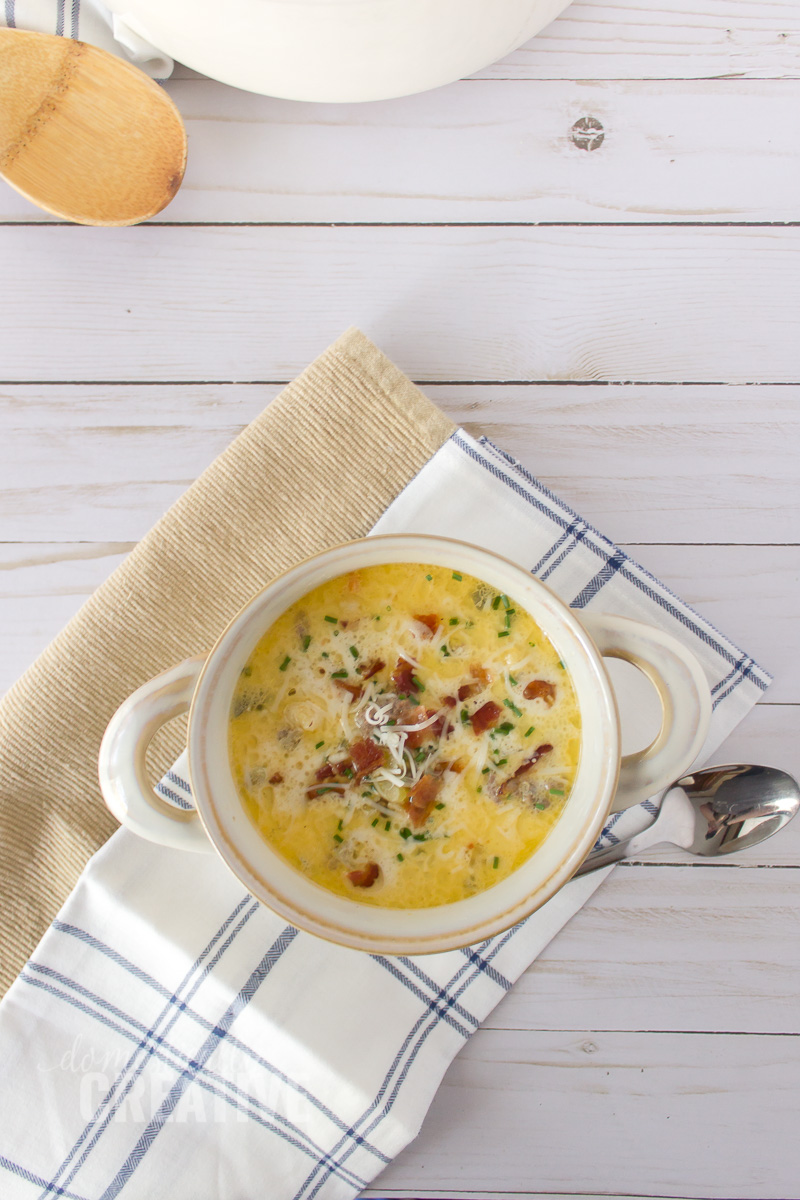 Currently as I write this, it’s a chilly 65 degrees in our house and last week it was even colder. Don’t get me wrong, I am so glad to live in an area that has all four seasons, I’m just not thankful when it comes to paying our gas bill. So I’m going to hold out on the furnace until I can’t possibly stand it anymore. 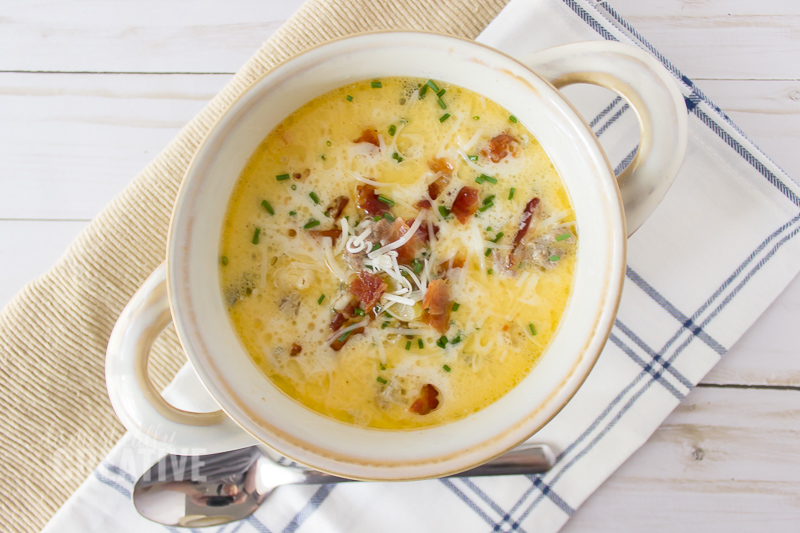 Thank goodness for this hearty bacon cheeseburger soup! It warms us up on super chilly evenings (like last night), and having the stove on helps heat up the house too. Now if only I had a low carb bread recipe to go with it so I’d have an excuse to turn on our oven. 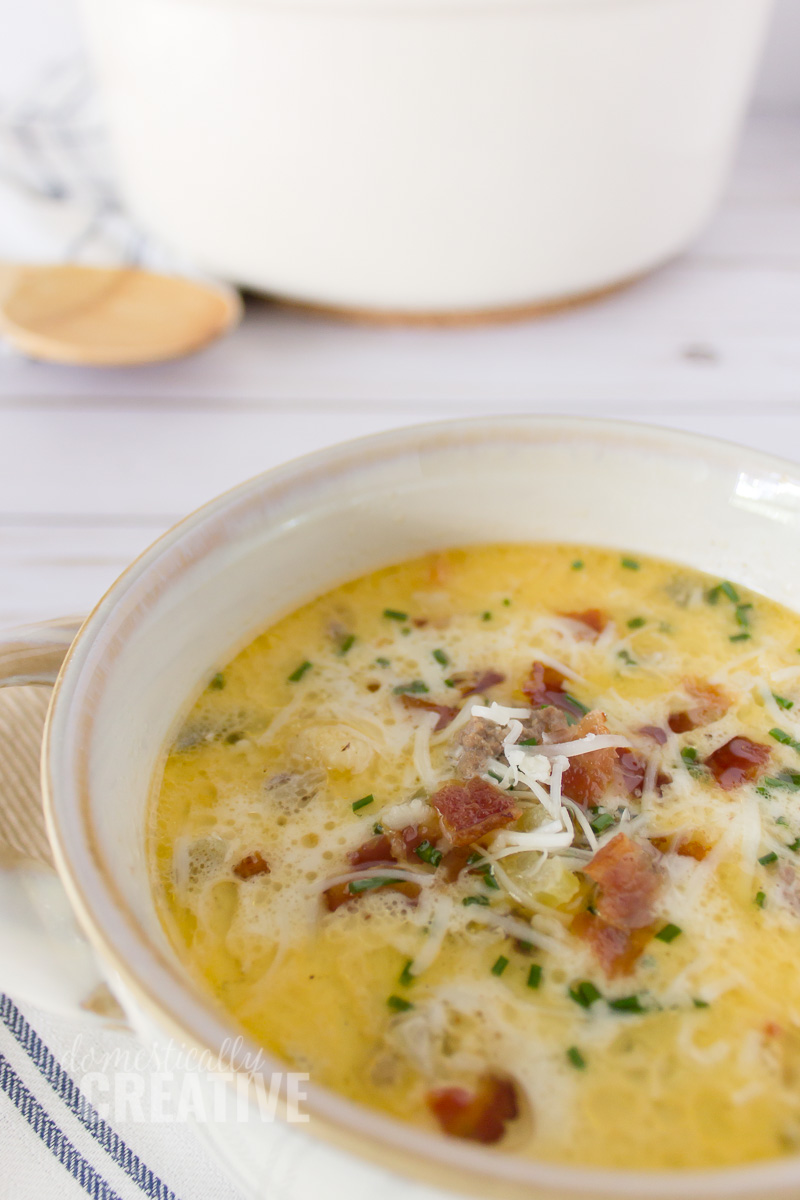 If you don’t want to make this soup on the stove, I’ve also included directions to make it in your slow cooker. I’ve made it both ways and each time the bacon cheeseburger soup comes out amazing! And if you aren’t following a low carb diet, feel free to sub out the cauliflower for potato!

Looking for more soup ideas? Check these out: 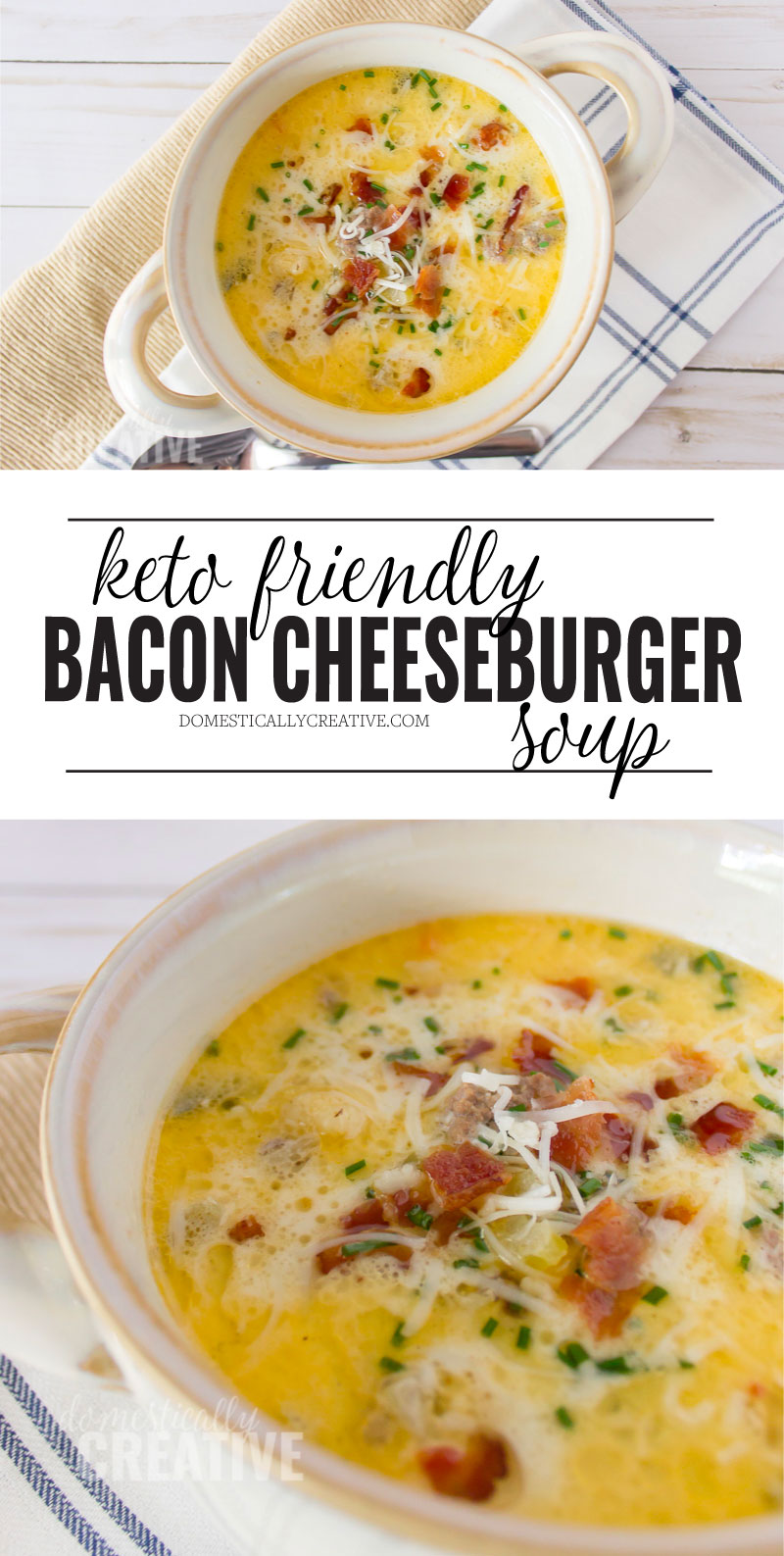 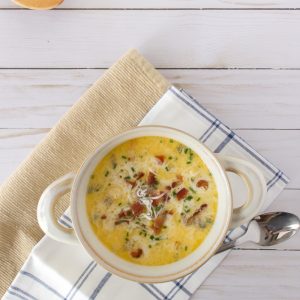 ***Can be adapted for Slow Cooker*** Cook bacon and ground beef as normal. Add cauliflower, celery, carrots, beef, bacon and broth to slow cooker. Cook on low for 8 hours.  30 minutes prior to serving: In a small sauce pan, add heavy cream and whisk in xanthan gum. Bring to a low boil and immediately reduce heat. When the mixture has thickened slightly, add it to the pot of soup and stir. Add in shredded cheese 1/4 cup at a time and mix well so it melts evenly.  Place lid back on slow cooker and let cook for another 15-20 minutes.
« Delicious Slow Cooker Comfort Foods
Thanksgiving Day Recipes »

One photo may be used to feature a project or recipe from Domestically Creative, as long as clear and specific credit is given and a link back to the original content is provided. Photos used on this site are subject to copyright laws. Republishing recipes, tutorials or any blog posts is prohibited unless express written consent is given.
This site uses cookies to enhance your user experience. By continuing to visit this site, you agree to our use of cookies.
6950shares