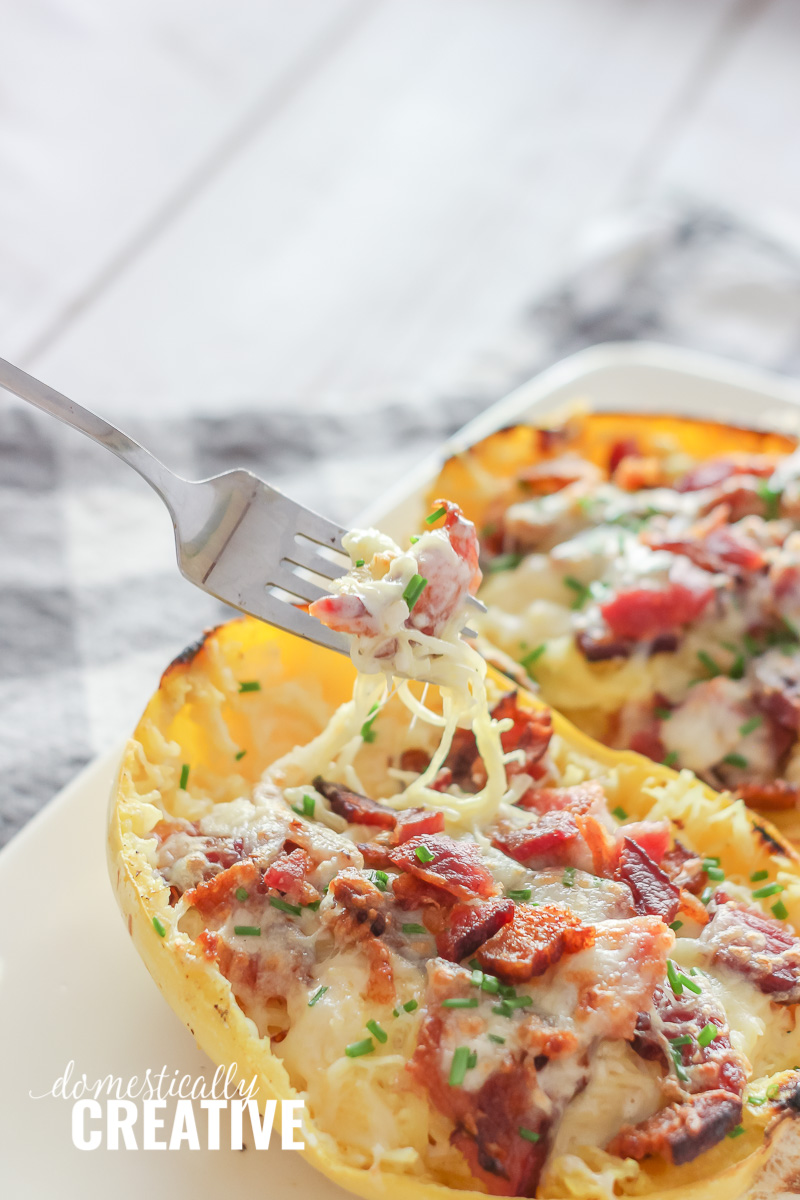 Have you ever tried spaghetti squash? We had never even considered it until this year. Seeing squash on sale all over the grocery stores got me thinking that I really haven’t experimented much when it comes to eating it. Sure I’ll eat zucchini roasted, zoodles and in quick bread form, but that’s about the extent of my squash eating experience. 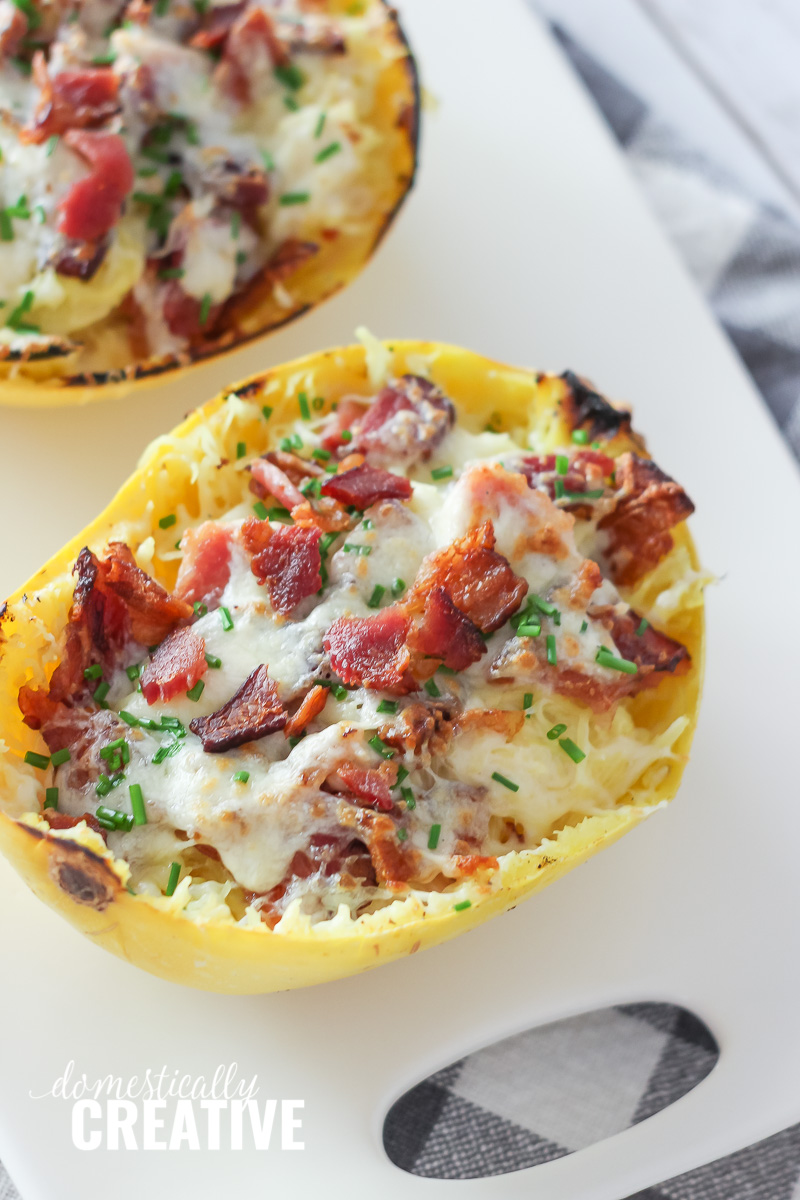 My husband was not on board at first. That is, until I made my first dish with zoodles. Apparently that’s all it took to convince him that squash isn’t so bad. He loved the zoodles, so why wouldn’t he like spaghetti squash?  The first time I prepared it, I just used regular jarred spaghetti sauce and cooked some meatballs to go with it. It was good, but it wasn’t great. In fact, I found myself just wanting to eat the spaghetti squash plain! It’s so buttery, nutty and slightly sweet. 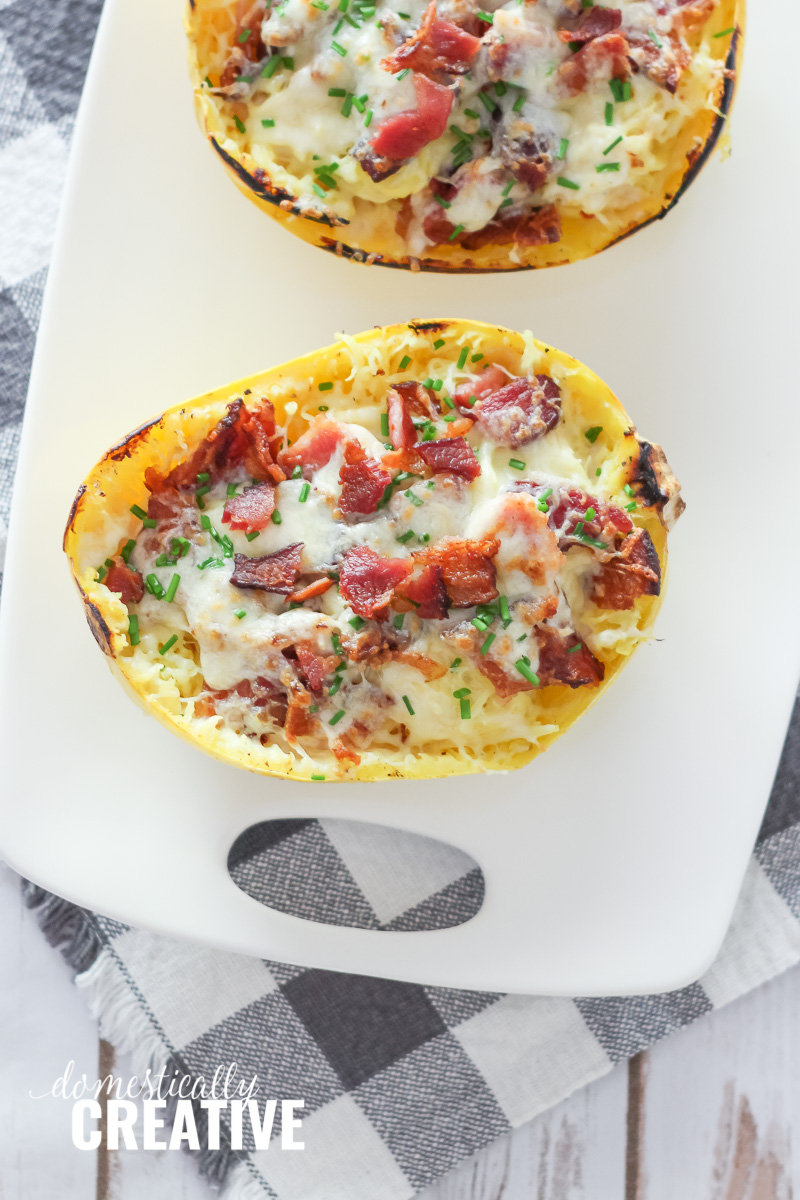 I knew the perfect compliment to that slightly nutty sweet taste would be something salty and savory. Of course bacon was my first instinct. Really, anything is better with bacon though right? So that’s where this bacon alfredo spaghetti squash recipe was born!

You might be thinking to yourself, wait, how is this considered an easy recipe if it takes an hour to make?! Well yes, it does take time, but that time is mostly oven time. That means you can stick this bacon alfredo spaghetti squash in the oven, and continue doing some other task. You don’t need to baby sit it. Just stick it in the oven, set the timer and go on about your business! 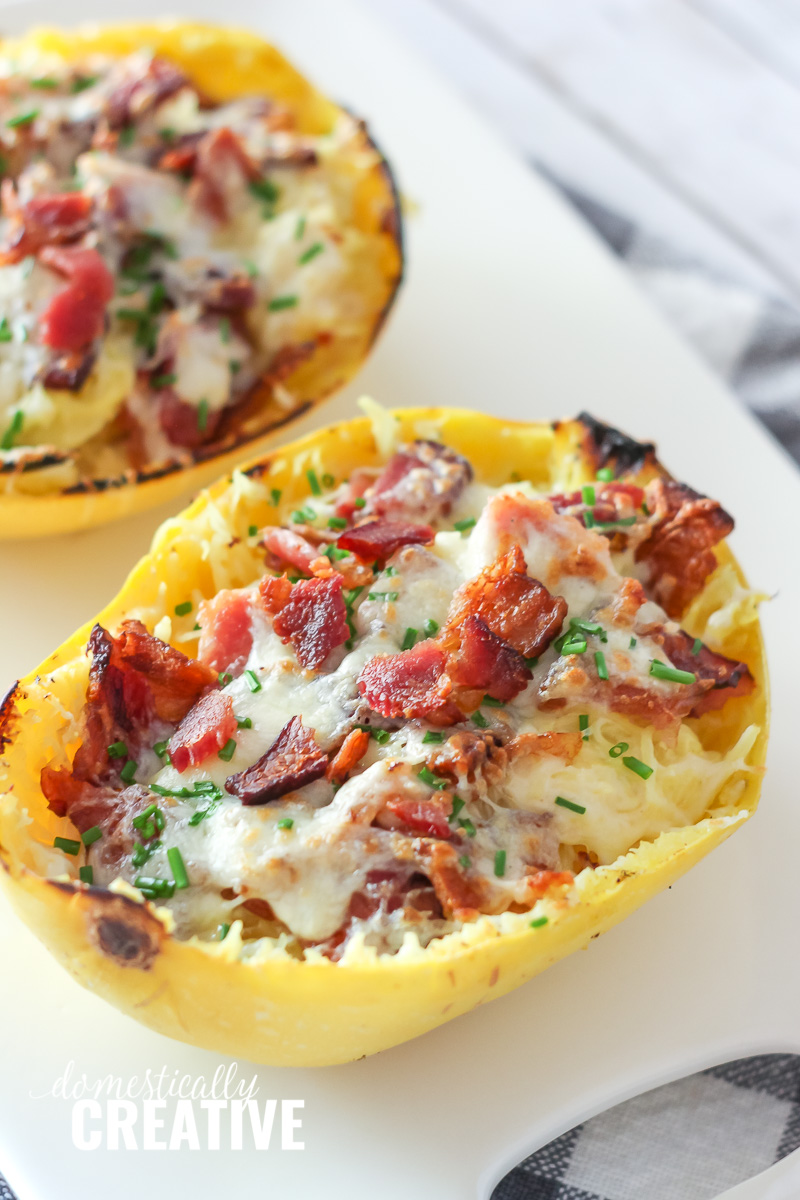 If you’ve never cooked a spaghetti squash before, it’s good to note that these suckers have a hard outer rind. You will definitely need a sharp knife! Also, “fluffing” up the squash after it’s cooked is one of the most satisfying things ever. No? Just me?  I also find it easiest to cook my bacon in the oven while the squash is roasting. I always cook bacon in the oven, as I find it makes less mess and is easier to clean up. Just toss the foil and you’re done. Plus there’s no popping grease to burn you! 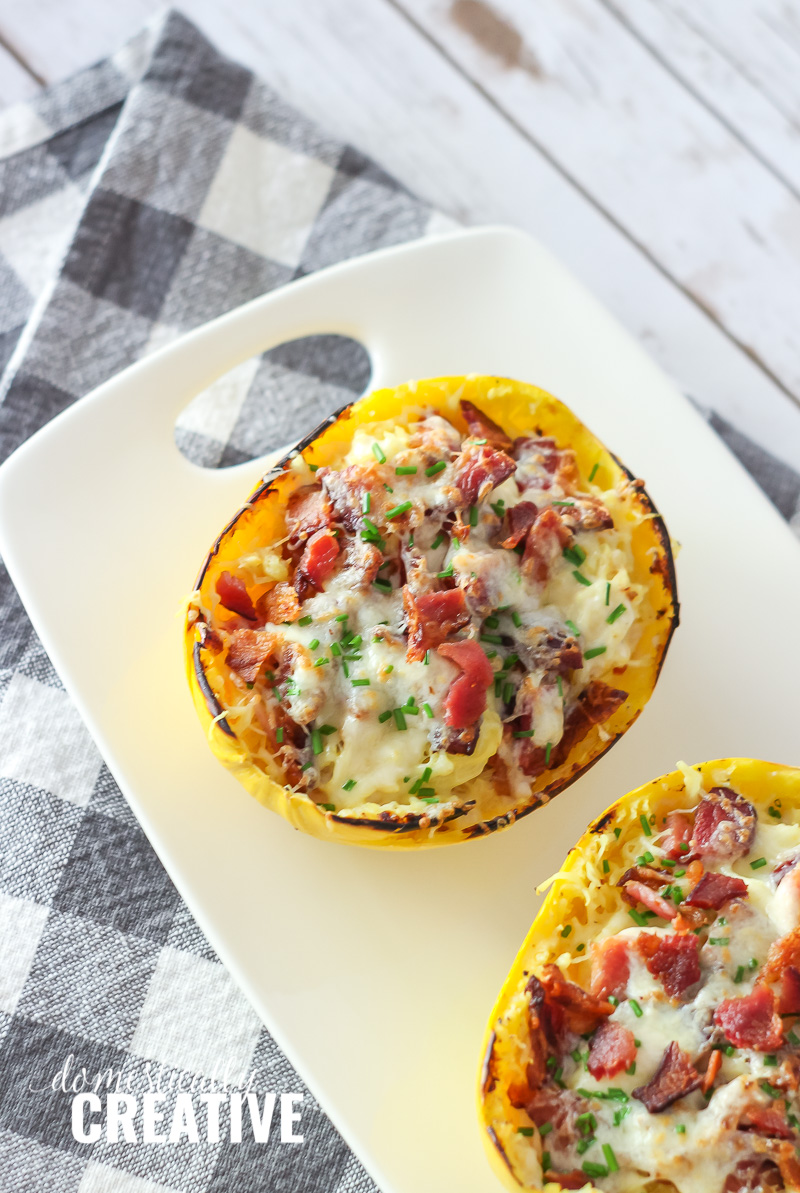 This recipe only has a few ingredients. You can simplify it even further by using a jarred alfredo sauce, but I prefer to make my alfredo sauce from scratch. Top your bacon alfredo spaghetti squash with your favorite cheese, like Cabot Creamery’s Bacon Cheddar (so good!) and enjoy! 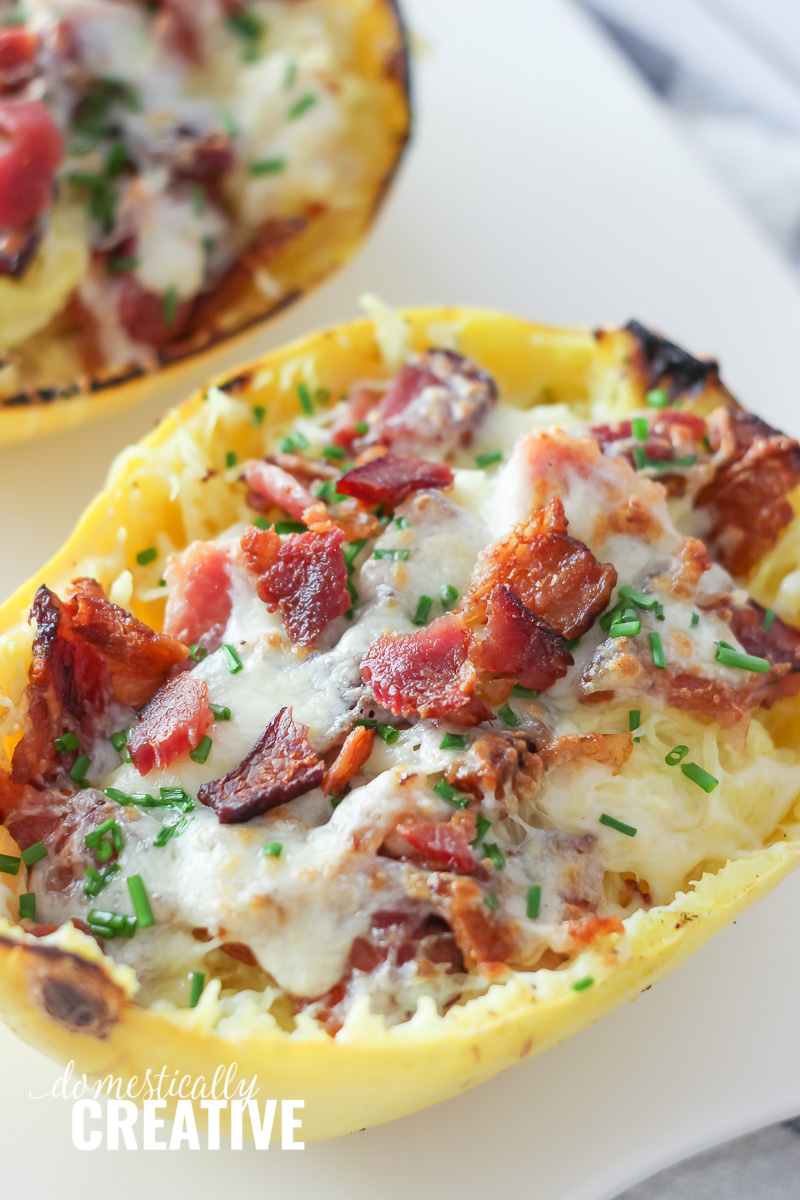 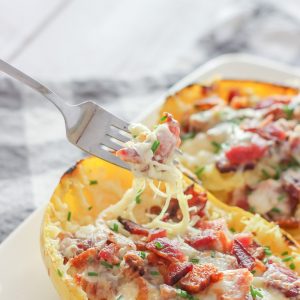 *Cooking the bacon in the oven while the squash is also cooking saves time and creates less mess. Simply line a baking sheet with foil, place strips of bacon on sheet and bake. Time will vary depending on desired done-ness.

Nutrition Facts as calculated with My Fitness Pal: 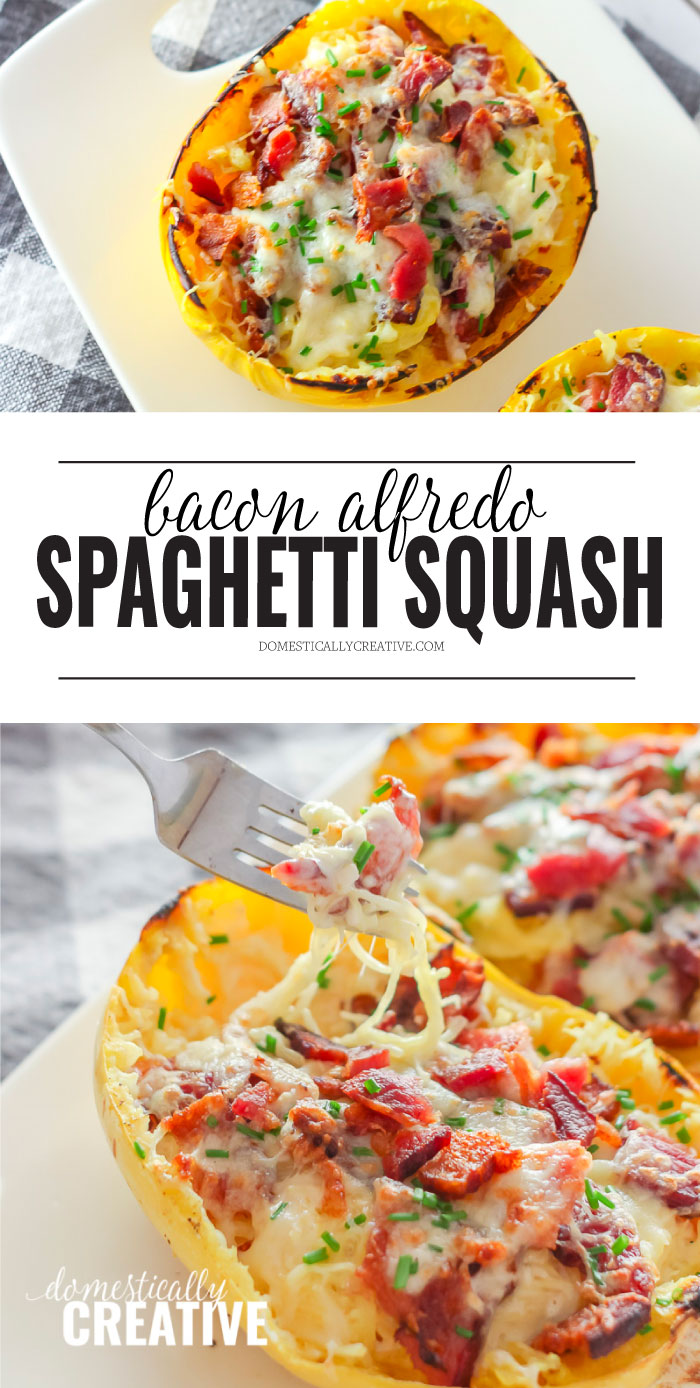 One photo may be used to feature a project or recipe from Domestically Creative, as long as clear and specific credit is given and a link back to the original content is provided. Photos used on this site are subject to copyright laws. Republishing recipes, tutorials or any blog posts is prohibited unless express written consent is given.
This site uses cookies to enhance your user experience. By continuing to visit this site, you agree to our use of cookies.
523shares